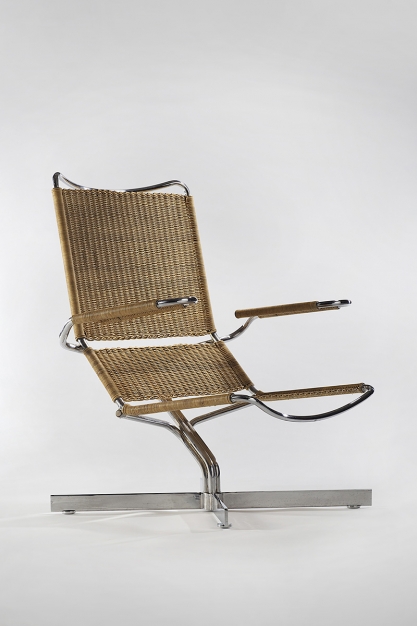 Demisch Danant specializes in twentieth-century European design with an emphasis on the late 1950s through 1980s. The gallery is engaged in an ongoing series of solo exhibitions dedicated to the most significant French designers of the 1950s through 1970s and has presented extensive exhibitions on the work of Maria Pergay, Philippon & Lecoq, Joseph André Motte, Pierre Guariche and Pierre Paulin.

For Design Miami/ Basel 2014, Demisch Danant presents an exhibition on acclaimed French designer René Jean Caillette, featuring rare and  important designs of the 1950s and 1960s. The exhibition includes several unique works and rare prototypes acquired from the designer’s estate– many of which have never previously been exhibited.

Many of Caillette’s most exemplary designs are presented in three distinct living environments. One area focuses on designs of 1956 to 1958 and features the iconic Diamond Chair. A bedroom environment inspired by Caillette’s 1962 presentation at the Salon des Arts Ménager includes a rare vanity, a prototype for an armchair and an impressive upholstered bed. A living room environment based on a 1964 Salon des Arts Ménager presentation features rare prototypes for a sofa and low table.

René Jean Caillette (1919-2004) was part of a group of young designers who emerged following the reconstruction period, dedicated to designing elegant and accessible furniture, stripped of decoration and produced in series. George Charron, a French furniture manufacturer, discovered Caillette’s work in 1950 and their meeting led to the creation of Group 4, a collaboration between Caillette, Alain Richard, Genevieve Dangles and Joseph André Motte. Caillette received the René Gabriel prize in 1952 and continued to design for Charron until 1972. Throughout his illustrious career, Caillette adhered to a rigorous development and prototyping process and remained committed to simplicity of line and material innovation.