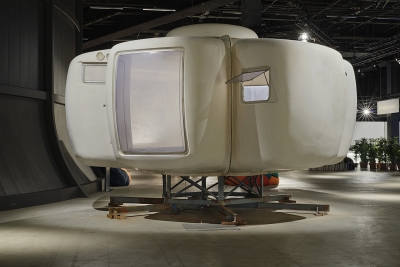 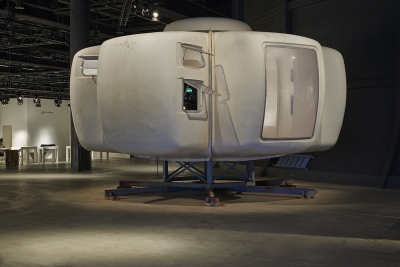 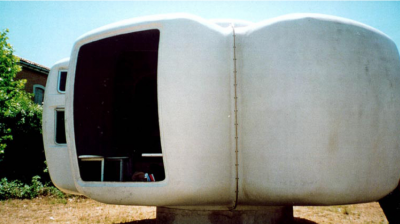 Jean Benjamin Maneval’s Maison Bulle 6 Coques (Six-Shell “Bubble” House), designed in 1965 and produced by a plastics company a few years later, was the only entirely plastic house in France to pass beyond the experimental phase into commercial manufacture. The six shells – fabricated of polyurethane-reinforced polyester, weighing about 210 kilograms each, and colored either white, orange, brown or green – were fastened together into an asteriskshaped house that could be easily transported and assembled. Nearly two dozen of Maneval’s bubble houses, including the example featured in Design At Large, were erected in Gripp, an “experimental” resort in the French Pyrenees, before production was discontinued.

Jean Benjamin Maneval was born in Amiens, France in 1923 and died in Paris in 1986. Both a practicing architect and an urban and sociological researcher, he studied at the Ecole des beaux-arts de Paris and played a central role in the reconstruction of French cities in the years after World War II. After devoting himself to the Maison bulle in the 1960s, his work turned increasingly international in the 1970s, with projects ranging from the redevelopment of the port of Beirut to multiple urban interventions in Buenos Aires.