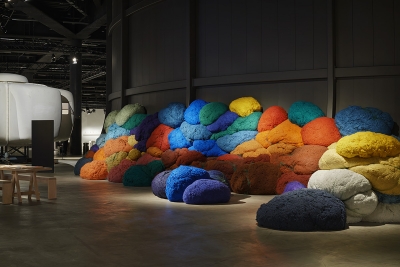 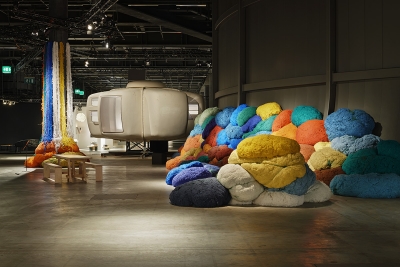 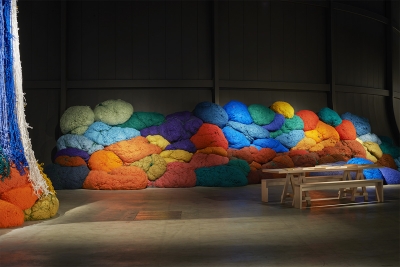 The work of Sheila Hicks effortlessly crisscrosses the terrain of fine art, design, craft and artisanal production. In her art, which can range from envelope-size ‘minimes’ to monumental architectural installations, skeins of wool, linen, cotton, silk, paper, rubber, plant material and other mediums intertwine or hang freely from walls or ceilings, sometimes tumbling into coils on the floor. Hicks’ compositions amplify the character of her chosen materials, cohering into three-dimensional drawings that loop and twist and unfold again in unexpected ways. Sheila Hicks exhibition Baôli, 2014, Palais de Tokyo (Paris).


Within a practice spanning sixty years to date, the artist has created work of astonishing variety. But a single preoccupation unites and animates her oeuvre: the language of color. For Design At Large, Hicks has created Séance, an interactive installation that invites visitors to engage as participants in her ongoing study of color as a medium of art and design. Hicks is working with a new synthetic color-fast textile – produced in Turkey, processed in Western Europe and woven in the United States – which visitors will be able to bend and twist with their hands. The material originates as pure powered pigment, which is combined with a binding agent and then spun into cords. It can thus be thought of as a translation of color into a three-dimensional form, which Hicks compounds through a site-specific intervention in the Herzog & de Meuron designed space of Design Miami/ Basel. As the artist explains, “I always begin with architecture. You don’t just make something and then plug into it. You think about what the architecture allows you to do.”


Sheila Hicks was born in Nebraska, USA in 1934 and has lived in Paris since 1964. After graduating from Yale University, where her professors included the painter and printmaker Josef Albers, she traveled to Latin America on a Fulbright scholarship – where she developed her interest in working with textiles and fibers. Her work is in the collections of countless international museums, among them the Museum of Modern Art, the Centre Georges Pompidou and the Stedelijk Museum Amsterdam. In 2014 her work was featured in the Whitney Biennial in New York and at the Palais de Tokyo in Paris.