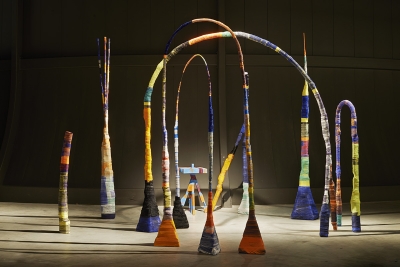 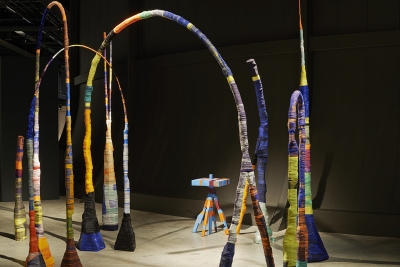 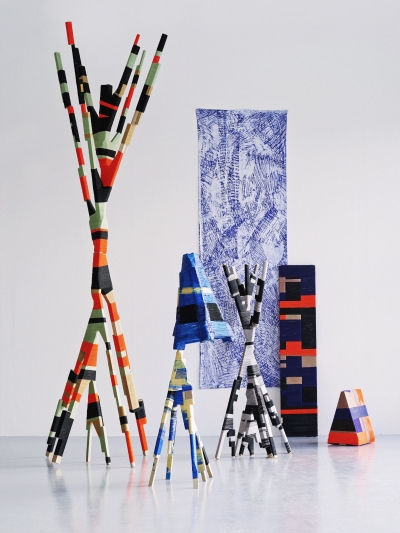 Anton Alvarez’s furniture and lighting pieces wrapped in thread by his Thread Wrapping
Machine, as featured in Gallery Libby Sellers

For the last two years Anton Alvarez has been producing multicolored, uncanny design objects via the Thread Wrapping Machine, a tool of his own creation that joins together wooden components with glue-soaked fibers. The glued thread – as much as 24,000 meters worth in some cases – wraps around the wood and functions as a kind of externalized joint, eliminating the need for nails or screws to fasten pieces together. For Design at Large, Alvarez has moved away from the creation of discrete design objects and has produced a large architectural intervention comprising multiple arches that will curve above visitors’ heads. The thread serves to bind the arches but also has a decorative aspect, filling the space with color.

Anton Alvarez, a Swedish-Chilean designer, was born in Uppsala in 1980 and now lives in Stockholm. His early interest in graffiti – an interest reflected in the informality and improvisation of the Thread Wrapping Machine – led him to study fine art, before transitioning to interior architecture and design at the Konstfack in Stockholm and the Royal College of Art in London. His work has been exhibited at the Victoria & Albert Museum the London Design Museum, and other major venues.