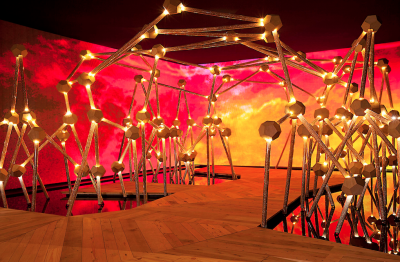 For over a decade, Swarovski’s creative collaborations have been a coveted opportunity for the world’s leading artists, architects and designers to experiment and share their most radical ideas using the medium of crystal. Swarovski has developed a strong partnership with Design Miami/ and since 2008 has been a Main Sponsor as part of its mission to promote creativity.

The company’s support of contemporary architecture, art and design projects is driven by the recognition that creative visionaries embody the values which the crystal house has upheld for so long: creativity, innovation and experimentation.

Swarovski’s past collaborations with the likes of Ron Arad, Tom Dixon, Ross Lovegrove, Tord Boontje, Arik Levy, Yves Behar, John Pawson, Zaha Hadid and Rem Koolhaas have resulted in a spectacular body of work which provides a snapshot of the most exciting and innovative minds of the 21st century. Swarovski’s recent projects include ‘Luminaire’ by Rem Koolhaas for the Venice International Architecture Biennale, The ‘Gabriel Chandelier’ by Ronan and Erwan Bouroullec for the Palace of Versailles, ‘Perspectives’ by British minimalist John Pawson, which was shown at the Venice International Art Biennale; and ‘Prima’, created by Zaha Hadid at Vitra Design Museum in Germany.

Design Miami/ 2012: ‘Parhelia’ by Asif Khan, designed in collaboration with Swarovski Crystal Palace, explored the relationship between the refractive qualities of crystal, light, nature and architecture. Inspired by the optical properties of water particles in the sky, which form ice crystals, Khan recreated the illusion of the ‘ice halo’ phenomenon in the sub-tropical climate of Miami Beach. ‘Parhelia’ incorporated over 1 million Swarovski crystals in an architectural structure nearly 20 feet high which featured crystallized halos that appeared to move about the exhibition space.

Design Miami/ Basel 2012: ‘Beta’ showcased designer Eyal Burstein’s exploration of the relationship between client and designer, reflecting the eclectic relationships Swarovski Crystal Palace has developed with material and manufacturing experts in order to innovate and experiment with the medium of crystal. The collection included a Plexiglas bench and three cast-concrete and metal chairs. All pieces – part handmade art and part machine produced design – inspired by the shape of Swarovski chaton-cut crystals.

Design Miami/ Basel 2011: ‘Iris’ by Fredrikson Stallard for Swarovski Crystal Palace was a large-scale collection of four half-spheres, each combining Swarovski crystal with different metal treatments, which dramatically embodied the allure of the human eye.

Design Miami/ 2008: ‘Liquid Space’ by Ross Lovegrove for Swarovski Crystal Palace combined the natural world and technology to create a dramatically tapering funnel of crystal that appeared to pour from the ceiling onto four interlocking mirror-polished aluminium tables below.